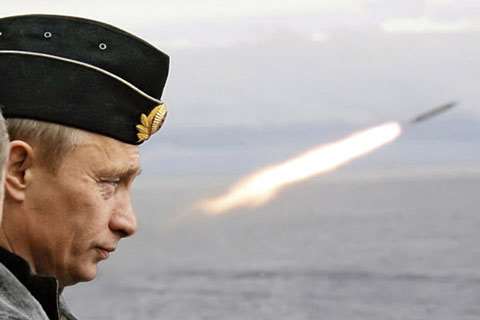 Editor’s Note: Consider for a moment that you are President Vladimir Putin. You’ve seen US and European sanctions seize the personal wealth of members of your parliament through various banking mechanisms as a result of their material support for the actions in Crimea. As the President of Russia, what do you do when those same sanctions now target your personal wealth and business interests? Do you sit idly by while $40 billion dollars are confiscated from your personal accounts? What course of action do you take next?

That is exactly the position that Vladimir Putin is now in, and according to the following report, National Security Adviser Susan Rice makes it clear that the United States is seriously considering this as an option.

The strategy may have worked out great when the United States seized the assets of deposed leaders in Egypt and Libya. It’s an entirely different matter when you target the President of a nuclear armed nation and one who has had no qualms about going head-to-head with the United States, not just in rhetoric but with his actions both economically and militarily.

Of course, as Zero Hedge notes, we’re sure the Obama administration “has considered all the intended and unintended consequences of such a move.”

While the White House has continually threatened further sanctions against Russia for non-de-escalation (even as it un-de-escalates itself), thespecifics of the additional sanctions have been sparse. German CEO warnings over blowback from economic sanctions… the “nonsense” of replacing Russian gas with US gas… the Russian warnings of “interdependence” and “boomerangs”… all reduce the West’s arsenal of financial sanctions. But, as The Times of London reports, perhaps the US has found a crucial pain point for Putin – a sanctions regime that would target Putin’s personal wealth, which includes a reported $40 billion stashed in Swiss bank accounts.

As The Hill reports,

The White House on Friday refused to comment on reports that Russian President Vladimir Putin’s personal wealth could be targeted if the West were to move ahead with additional sanctions over Ukraine.

“I’m not going to get into foreshadowing particular individuals or entities that the United States may target,” national security adviser Susan Rice told reporters at the White House. “But let me just say we’ve been clear that there are additional individuals, officials, close associates of senior leadership, oligarchs and those entities that they are associated with that remain very much potential targets of additional sanctions.”

The Times of London reported Friday that the U.S. was preparing a sanctions regime that would target Putin’s personal wealth, which includes a reported $40 billion stashed in Swiss bank accounts.

Putin’s actual holdings are a tightly held secret, and the extent of his holdings are difficult to estimate. But a threat of trying to freeze the Russian president’s personal assets could have played a role in a deal brokered Thursday by foreign ministers from the U.S., Ukraine, Russia and European Union.

Putin was asked why the US can do whatever it wants and no one punishes them, while attempts are being made to punish Russia.

“The US is certainly one of the world’s leaders. At some point it seemed that it was the only leader and a uni-polar system was in place. Today it appears that is not the case. Everything in the world is interdependent and once you try to punish someone, in the end you will cut off your nose to spite your face,” he said.

Though we are sure Obama and his team have considered all the intended and unintended consequences of any such actions.