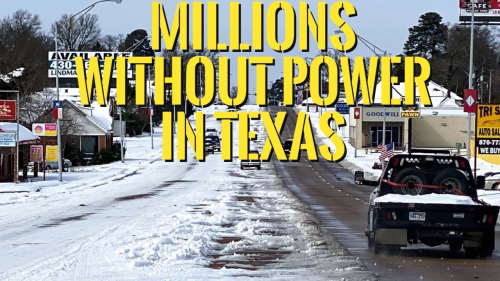 3 Million Texans Without Power As Grid Chaos Continues Ahead Of Imminent Ice Storm. The lack of gas flowing to powerplants plus unprecedented demand for power has resulted in the state’s highest-ever electricity rates. Power demand has surpassed supply leading to massive blackouts for the last couple of days. Cell phone service is starting to break down over the region as back up generators at towers are freezing or running out of fuel or both. The freeze also took a toll on the state’s energy industry, the country’s largest crude refinery shuttered operations on Monday. Over the weekend, natural gas pipelines had restricted flow as wellheads froze.

The cold snap in Texas has forced the shutdown of “refineries, oil wells, and meat plants, disrupted shipments of soybeans and corn, and is still leaving more than 3 million customers without electricity could continue to keep parts of Texas in the dark for several days,” according to Bloomberg. With more than 3 million customers without power, there is no way ERCOT will restore power tonight. It could be a couple of days before full power is restored.

Texas in Deep Freeze, America turning into a Third World Country. Things are going to get very rough in America going forward. 2021 will make 2020 look like a good year. The Globalists are in charge now, and hell is bent on resetting America. The elites will do just fine in their mansions and private jets.

The average Joe will be scrambling just to feed his family and keep the heat on. Have a plan; it is going to get very ugly in America. Gas prices up. Energy and Utilities up. Food up. Health Care up. Taxes up. Unemployment up. Forty-plus million people about to be evicted, plus 1/3 of all businesses, have already permanently shut down. Smaller family-owned stores crippled by lockdowns.And once the eviction moratoriums are finally lifted all over the country, we are going to see the largest tsunami of evictions in American history.

The fruits of the evil ones. And no one will be held accountable. Up to 15 million Texans remain without heat and electricity as temperatures across the state are well below freezing. Thousands of Texans don’t have power, heat, water, or food. And it gets worse as water pipes are beginning to break. What a great time to be shutting down the oil industry. The state of Texas made a series of decisions regarding its power distribution infrastructure.

The decision to close coal power plants, start replacing them with green energy. So yeah, solar panels are not worth bupkiss when they are covered with snow; the same goes with wind turbines that lack deicing capabilities. These were choices made by the state of Texas. Now Texans have to pay the price. Maybe being tied into the rest of the grid would have prevented this from happening.

IT IS GOING TO HAPPEN AGAIN. Don’t forget canceling the keystone pipeline, so things have to come slowly by train. Closing the cleanest coal plants in the world that only emit harmless CO2 and Water, then re-building mega filthy plants in China and India to fuel cheap factories.

The Bankers Dream Hidden in a Sheen of Green. Destroy the country. Make everyone dependent on the government. They love it when mother nature adds to the demise of your average person. A state that once prided itself on its energy independence has been hijacked by the far-left faction, and this is the result. This is what the greening movement is all about. It is a massive power grab and con. The Grand Solar Minimum is just getting started. Buckle up and Enjoy the Great Reset. It is going to be a very rough ride. A perfect storm is approaching as the entire USA is becoming a Third World country.

Neglected infrastructure, debased close to worthless currency, twenty thousand armed troops guarding the seat of the government, censorship of any dissent, a political purge of the military, and a populace so dumb, poor, and increasingly unarmed to do little if anything about it. Mission accomplished. It is a cash grab, manipulation beyond Enron. And they will get away with it, plus I expect the lobbyists will get them a bunch of taxpayer money to pay for hardening their systems for colder weather. We have allowed our infrastructure to fall apart while allowing our borders to be overrun by a peasant class. A new dark age is upon us.

The pandemic, the lockdown, the masks, the vaccines, the debt, the negative interest rates, the cost of education and healthcare, the police state, the big tech,and dozens of other mind control experiments are just signs of this dark age. It is inevitable unless we turn this ship around soon. Everything there is 100% governmental. That’s what is about to happen. We send billions overseas while our own people struggle with hunger. There really is no reason anyone in this country goes hungry. In those situations, some chronic fatal lifestyle choices are preventing the acquisition of a proper meal.

Bill Gates bought up all the farmland, and you won’t be able to eat anything nonsynthetic not so far into the future. If most people cut the junk out of their diets, their food budget would go a lot further.

Get your own GARDEN going and not worry so much about the price of the junk they’re stuffing into boxes, cans, and wrappers. These are very troubled times, and they are about to get even more troubled. The devastation in Texas is a grim reminder to the rest of us that our lifestyle is fragile – taken away in a moment, whether frigid weather, tornadoes/hurricanes or economic collapse. If you’re not prepared (not just food), let this be a stark reminder to get crackin’.

You are here for your daily dose of the truth, the whole truth, and nothing but the truth. Please take a second to hit the like button, hit the subscribe button, and don’t forget to also hit the notification bell. The US Government Runs Another Massive Budget Deficit in January. After running the biggest December budget deficit in history, the US government followed up with another massive budget shortfall in January. According to the Monthly Treasury Statement, the January deficit came in at $162.83 billion.

That’s nearly five times bigger than the January 2020 shortfall. Governments and countries accumulated more debt during the pandemic than they did during the 2008-09 financial crisis, a leading trade group said on Wednesday. The Institute of International Finance said global debt-to-GDP surged by 35 percentage points to over 355% in 2020, rising by $24 trillion to $281 trillion. The global debt ratio rose ten percentage points in 2008 and by 15 points in 2009. . Compared to GDP, it looks even worse off.

The US dbt includes national debt, corporate debt, muni debt, consumer debt, and liabilities is 400%. Just the corporate and federal debt is 42 Trillion which about 200 plus % of GDP. Keep in mind that about half of corporations in emerging markets and China are essentially state-owned. I can tell you that, roughly, global debt in all categories is growing at a faster rate than global GDP, with total debt at about 250% of GDP in 1999 compared to 300 to 330% of GDP today, depending on whose numbers you use. The US government is spending money at a torrid pace. Uncle Sam blew through $547 billion in January.

That brings total spending through the first four months of fiscal 2021 to $1.92 trillion. Congressional Democrats are prepping their legislative package to carry out President Joe Biden’s $1.9 trillion stimulus plan with an eye to getting it passed in the next few weeks. Just pass it already.What’s another $2 trillion to add to our $28 Trillion dollar deficit! It used to be only banana republics who had deficits of over 100% to GDP. Per CBO, US debt is expected to exceed 100% to GDP in 2021 .This before the 2 or 3 trillion dollars we are adding this year in stimulus.

This will cause the US dollar to go down – and Oil and inflation to go up. $1.9 Trillion stimulus is approximately $6,400 of spending per American. For a lousy $1,400 check, Americans will pay 4 times that amount somehow in inflation and higher taxes. What a bad deal. The Stimulus is code for staggering amounts of free money. If you are in financial difficulty, how the hell is $ 1,400 One-time check going to help? It won’t. It is just political theater . The pandemic with all the mutations will be with us for a very long time. Once this free money is swallowed up in a week or two, do we throw more cash at it? This is no way to run a railroad. Real jobs for real people with a decent wage spurred by pork-free government investment in infrastructure and trade schools would accomplish considerably more favorable results.

Tsunamis of cash do precious little. Recapture our manufacturing base, secure and bring home our supply chains, and train the unemployed with skills needed today. Tech and clean energy job development can easily run in tandem with skills already needed. Help those in need, challenge all to work for their daily bread, put an American to work for financial, emotional, and health reasons. The airlines and tourism are only two of the high-profile industries chosen to be sacrificed for the Great Reset; where we will all face a New Normal and a lot less pleasure and fun in our lives. Our response in 2020 to a the pandemic was and still is wildly overblown.

This was intentional economic destruction by a relatively few rich people and psychopathic technocrats. Is there anyone outside that small cabal who doesn’t think Klaus Schwab is evil? “…we will all face a “New Normal” and a lot less pleasure and fun in our lives.’” —That sounds like life in Texas. The only travel ya’ll will be doing is in boxcars… That is our future before the end of this year. Stay prepped and stocked. Be ready to self-quarantine for up to 3 months, never leaving home or opening your door to anyone. 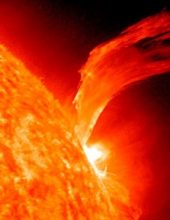 Power Grid Warnings Have Gone Out For United States Power Grids Due To Solar Storm!