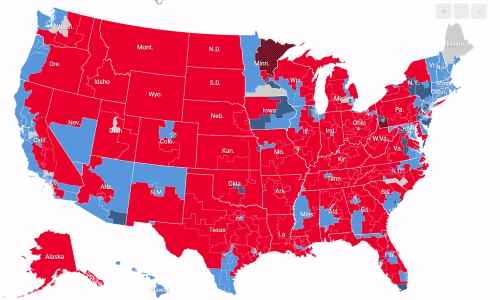 The metastatic cancer of Socialism/Communism took hold upon the body of the United States on election day.  The combination of lying, outright cheating through rampant voter fraud and illegal alien voting, a completely propagandized mass-media, and a systematically dumbed-down young populace of NPC’s, finally overcame normalcy and common sense, to doom the United States of America to Civil War, and death.

It’s a shame, really, but the election was a culmination of a very well executed plan, by completely evil people, to foment a hostile Communist takeover of the last bastion of liberty on this planet, and the plan won.

Democrats now need to be reminded THEY ARE SURROUNDED.  See the tiny blotches of Democrat Blue on the map?  They are vastly surrounded by massive areas of Republican Red.

The Red areas need to stop selling FOOD and FUEL to the Blue area.  Literally starve them to death.  I mean it.  I’m serious.  And while I personally do not have the ability to do anything like this myself, I certainly can advocate it, which is what I’m doing.

Because unless the blue areas are actually, methodically, deliberately starved to death, intentionally killed-off,  the cancer that they are, will kill our Republic. While I do not have any intention of trying this myself, I cerainly can advocate it be done, and I am advocating it.  Here’s why:

Face it, Republicans, Conservatives and even Libertarians:

And these folks are, in fact, NPC’s; they do not think for themselves, they think what other people TELL them.  It’s as though they’re programmed, not human.  Here’s an explanation for those yet unaware.

The only way to accomplish that without outright Civil War, (which, by the way, may now be a foregone conclusion) is to smash their economies, put them out of work, and cut-off supplies. That is peacefully achieved by simply declining to sell to those areas.

As they start running out of food and fuel, these areas will implode.  They will self-destruct. Because these are the areas where all the “Gimme Free Shit” people live.  When the supply of free shit gets cut off, these ignorant human political cancer clusters will self destruct.

It will be hard to watch as these once-great areas wither and die.  There will be screaming and gnashing of teeth.  But is HAS to be this way.  The people in the blue areas are a political cancer that must be stopped.  Eradicated.  Wiped-out of existence.

It seems to me the red folk inside these blue areas will be essential to the effort; they will need to sabotage systems, cause upheaval, and direct the blame for all of it upon the folks who have taken power.  While I have no intention of doing any harm or sabotage to anything, I certainly can OBSERVE that such actions may have to be done by someone, and I am making that OBSERVATION here.

In my opinion, it has to be this way because these political human cancer units are too stupid to realize what they’ve done, and too arrogant in their stupidity to realize they’re wrong.  There is no fixing this, there is only destroying it.  The blue areas are political cancer and the cancer is spreading.

From experience with my own younger brother dying from cancer, I can attest to the reality that when you’ve got cancer, you don’t negotiate with it.  You don’t peacefully co-exist with it.  Either you kill it, or it kills you.

The blue areas on the map above are, in my view cancerous.  I personally opine they need to be done away with. And while I have no plans or intentions of taking any such action on my own, I can give my OPINION on what I think.  That’s what I’m doing here.

It occurs to me that the ideas I put forth above would take far too long to implement.  And when the screaming and gnashing of teeth became too much, folks would give-in out of a sense of humanity, and start helping the cancer cells.

No.  The idea of ceasing sales to the blue areas to strangle them economically and cause their collapse, is not a sustainable political strategy to get rid of this cancer.

Here’s a better idea:  Start a war with Russia; and with China too!  Get those blue areas NUKED.

War will smash the country to hell, wreck the economy and thus make it possible to repudiate our national debt, most of which was accrued giving free shit to the human cancer in those blue areas.

By starting a nuclear war with Russia and China, those blue areas – the major population centers – will be the first to get nuked.  This will not only put an end to the cancer, it will also put and end to the NPC’s infesting those places, and get rid of the useless eaters who put the nation into Bankruptcy to begin with.

Yes, this is a much better strategy.

We can play-off the “blame Russia” nonsense the political cancer has been using for the past two years, to foment such a war.

When the missiles start flying, the fucking morons in the Blue Areas are so ignorant, they wont even realize it was THEM who caused it all along.

Yep. That’s the ticket.  Let’s start beating the war drums for war with Russia and China.

The faster we get the blue areas of this nation nuked out of existence, the better off the world will be.

Let the nukes kill em all and let God sort it out.

And before you come whining to me about wanting these people dead over their political beliefs, — and I DO want them dead — let me be clear: The reason I hold this opinion is because I already know from history that THEY WILL HAVE TO KILL YOU AND ME to fully implement the system they are embracing.

Throughout ALL of human history, whenever Communists come to power, the first thing they do is to systematically KILL-OFF anyone who poses a threat to them.  That’s the way it has always been.

Communism, and it’s devious cousin Socialism, are absolutely, irrefutably, systems doomed to failure because they operate solely on stealing and against human nature of freedom and self-reliance.

NOT ONCE in human history, has any Socialist or Communist nation been able to survive without mass killings.  Here, read the facts for yourselves: The Communist Death Toll

So you may feel the need to criticize me for advocating the deaths of the people in the blue areas, but in reality, it’s only doing unto them (first) what they will INEVITABLY have to do to us.  There’s no way around it!  In order to continue doing what the blue areas do, they will HAVE to kill-off most of the Red areas to take absolute power.

In fact, they’re already doing it.  All the political violence taking place in this country has been caused by the left.  All the overt censorship of libertarian and conservative, pro-liberty viewpoints on social media platforms like Twitter, Facebook and Google, it’s all emanating out of that bright blue area in California called Silicon Valley.  So they are already using coercive measures against the rest of us!

So please don’t bore me with emotional attempts to convince me otherwise.  The course is set with these people.  They intend to do what they are doing and they are succeeding.  At some point, they will have no choice but to begin killing those of us who are self-reliant and who embrace liberty.

I say do unto to them first.  Don’t try fighting this and ending up suffering under Communism for 70 years the way the poor Russian people did.  Don’t keep “hoping” folks will wake up or get educated the way people in the Socialist Utopia of Venezuela did — and who are eating out of garbage cans right now because Socialism has – once again – failed.  Get it over quickly, in flashes of blinding white light.  Let the nukes fly.

Hey Russia and China: See the blue regions on the maps above?  If war comes, I hope you Nuke those areas first.

If you do end up launching against us, please be sure to target Mt. Weather in West Virginia and the Denver Airport in Colorado with multiple, deep-impact, warheads to assure wiping out Congress in their bunkers.  Those are the evil fucks who were so desperate to win and keep power, they bankrupted the nation (and much of the world) and meddled in affairs worldwide.  Got to make sure they’re absolutely wiped out so they can’t come out of their holes in the ground and start this shit all over again.

Oh, and about all the money the US owes to China, you aren’t going to get paid back anyway.  Even YOU know it.  There isn’t enough money on the entire fucking planet to pay back the $21 Trillion debt the United States owes . . . so write the debt off and move on.  If you folks press the nuke button and let the missiles fly, there will be an up-side to it: You’re wiping out the very people in the blue areas, who wrecked the world with their social spending demands.  It will be sweet revenge for you.

Russia and China also have vast, well equipped, and fully supplied underground fallout shelters for tens of millions of their people to survive.  So the civilian populations in Russia and China will, in substantial portion, survive.

We in the USA used to have Fallout shelters, but we couldn’t keep them because the politicians desperate to get re-elected, had to stop spending money on those shelters to give more cash to the free shit crowd, to keep getting re-elected.

What this means for Russia and China is that the free shit crowd in the USA has no shelters.  No emergency food or war preps.  They’re totally, completely, vulnerable.  Oh, and most of them – in their utter stupidity – embraced gun control; so they’re disarmed. They can’t fight back.  Easy conquest.

The ones in the US who are not the problem, (Folks in the Red areas) they have prepping supplies and shelters to survive, and when it’s over, they won’t be the ones causing trouble because they’ve NEVER been the ones causing trouble. It’s only the left-wing, liberal, progressive, socialist, communists in the blue areas shown on the map above who are — and have been – the problem.  Worldwide.

Nuking them out of existence would be a truly humanitarian gesture for the world.

In closing, just to be very clear and that there be no misunderstanding: If you voted for Democrats (Socialism and Communism) yes, I want you dead. Because I know that you are too stupid to live.  And I’m tired of paying for you to live so you can steal more of my hard earned money via taxes, to fund your lazy lives and failed ideas.

I am certainly not going to rush right out and commit any acts of violence or try to kill anyone, because that just won’t work. Too small a scale. But I sure as hell can wish for a whole slew of Liberal/Democrat/Progressive/Socialist/Communists to get killed; advocacy is still protected speech— for now. (See Brandenberg v. Ohio 395 U.S. 444 (1969);  Hess v. Indiana, 414 U.S. 105 (1973). ) 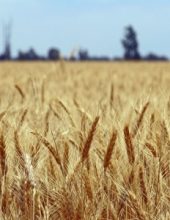