Denmark’s Defense Minister Claus Hjort Frederiksen has launched a series of wide-ranging and grave accusations against Moscow, saying that it presents a “direct, very frightening and serious threat” against his homeland.

“We need to make clear to ourselves in Denmark that we are in danger, and we need to act upon this,” the center-right politician told the Danish Berlingske newspaper.

Frederiksen was asked to expound on his brief in the first extensive interview since the 69-year-old was appointed to his post in November last year. Instead, the politician, who previously served as minister of finance during two stints, spoke almost exclusively about Russia.

“State-supported Russian hacker groups are ready to attack hospitals, infrastructure and the electrical supply by breaking into computer systems and creating a mess of notices and treatments within the health system,” said Frederiksen, referring to a report published by the country’s intelligence agency last month, as well as conversations with other Western politicians and security officials.

And why would Russia target civilian infrastructure in a small country with which it shares no border? “To spread fear and insecurity among the population and paralyze our democracy.”

"It's a way to destabilize our countries and democracies in a very physical and tangible way, and this places an urgent demand on our resources to defend ourselves against such attacks,” said Frederiksen.

Frederiksen’s accusations echo those of US intelligence officials, who published a report last week, alleging that Russia ordered hackers to meddle in the US election, specifically by releasing emails related to Democratic candidate Hillary Clinton. The Kremlin has repeatedly denied charges of interference.

The politician also believes that the Iskander-M missiles that Russia has deployed in its westernmost exclave of Kaliningrad pose an immediate danger to Denmark.

“We can confirm that the Russians are right now installing new missiles in Kaliningrad that can reach Copenhagen. That is of course a major risk,” said Frederiksen.

Moscow says the missiles are a response to the continuing unrolling of the US missile defense shield across Eastern Europe, and has beefed up its other armaments in the region, following an increase in NATO presence on the Russian border. The Western alliance is seeking to limit Moscow’s purported ambitions in the region through Operation Atlantic Resolve, commenced following the breakout of the conflict in Ukraine in 2014, and comprises the transfer of troops and modernized equipment to Eastern Europe.

Frederiksen also said that Russia’s "increased military activity” in the Arctic, in which both Moscow and Copenhagen have territorial claims – the latter through Greenland – were another potential source of conflict, which must require “extensive monitoring.”

As a solution, Frederiksen advocates increased military spending, though he declined to specify if Denmark intended to hit the NATO target of 2 percent of GDP being spent on defense (currently it spends 1.17 percent).

“NATO must be our common defense and our deterrent. We have to show the strength that it takes, and thus spend the money it takes to prevent the Russians from trying anything. That is basically what is the essence of our thinking,” said Frederiksen.

As a symbolic gesture Frederiksen emphasized the importance of the deployment of 200 Danish soldiers as part of the new 5,000-strong rapid response force in Eastern Europe next year.

"It is not of course because we think that the 200 Danish soldiers can stop the Russian army. But they should know that the territorial defense of the immediate area begins there and crossing the line, then the common solidarity in NATO will take effect,” said Frederiksen.

The newspaper said that the Russian embassy refused to comment on the accusations. 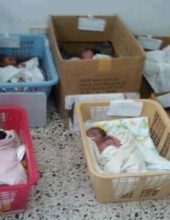