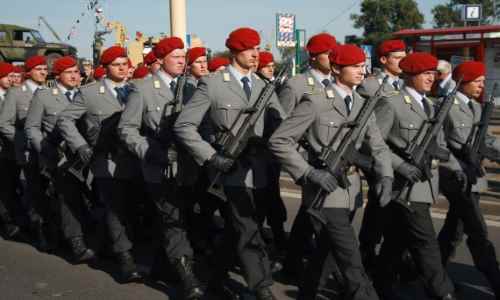 If ordinary Germans were not traumatized enough by this weekend's shocking official announcement that they should prepare to stockpile several days of food and water "in case of an attack of catastrophe" as part of the country's revised "Civil Defense Concept", then the latest news from German press agency DPA, will surely put them over the edge.  DPA cites a confidential document prepared by the government according to which the government isconsidering "bringing back nationwide conscription in times of crisis", such as situations in which the country needs to "defend NATO’s external borders."

"An attack on German territory that would require conventional defence is unlikely," the document said. However, civil defence measures are necessary because a "major security threat in the future cannot be ruled out," it added. 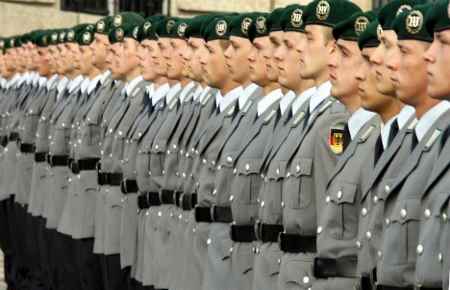 The German government abolished compulsory military service in 2011, arguing that there was no longer a geopolitical need for it. Even before then, many young men had avoided military service by opting to perform non-military service, such as working in care homes or in hospitals.

However, it appears that the government is now quietly considering its reintroduction under the controversial Civil Defense Plan, which is due to be discussed by the German cabinet on Wednesday, and focuses on fulfilling Germany’s obligations to defend NATO’s external border. However, as DPA adds, the proposal to revive military service is not readily apparent and can only be found buried in a section entitled “Civil support for the armed forces."

According to DPA, Germany is considering new security strategies after two terrorist attacks and a mass shooting last month, as well as tensions between the NATO military alliance and Russia about the 2014 annexation of Crimea and subsequent military involvement in eastern Ukraine.

“Quick and reliable delivery of mail especially important for the Bundeswehr (in particular, call-up papers and notices of performance in times of reintroduction of conscription) is ensured under Post- and Telecommunications Safety Act,” the draft reads according to the German press agency.

Adding to the unexpected militarization of German society, Defence Minister Ursula von der Leyen said earlier this month that the Bundeswehr would undergo training with federal police in preparation for deployment in domestic counterterrorism operations.

Should the government decide that there is sufficient grounds for it, conscription can be easily reintroduced as it is specifically authorized in the German constitution and can be returned with a simple law approved by the parliament, according to Die Zeit.

Apart from conscription, the German Interior Ministry’s paper also mentions the obligations of civilians and civilian organizations to assist the Bundeswehr in other ways, particularly by helping “recruitment organizations and accommodation infrastructure.” Some of the military’s support functions could also be outsourced to civilian companies, such as “a limited provision of catering for the troops during operations,” the paper reportedly says. In other words, should war break out German GDP will soar.

However, then the document goes far beyond modern-day military outsourcing tasks anddiscusses other proposals resembling war-time measures. Cited by RT, in times of crisis, the draft reads, the federal government can ensure “nutritional emergency preparedness” by imposing “tax obligations relating to cultivation, processing, distribution and sale of food products." The plan also includes the abovementioned suggestion to ration food and water in case of crisis.

As we reported on Sunday, the proposed “Civil Defense Concept” is the first time since the ColdWar that the German government has considered such measures, but the plan was devised as early as 2012, according to Germany's FAZ newspaper.

The German cabinet will review and decide on the "defense concept" plan tomorrow, at which point – if endorsed – we will likely have more details on how Germany is preparing for war crisis. SOURCE