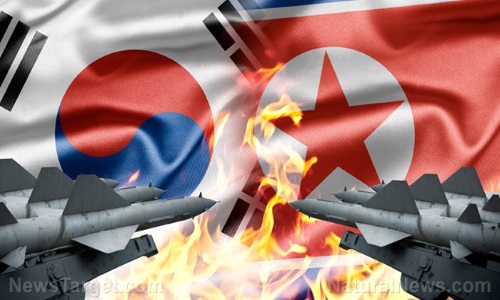 North Korea is a dangerous nuclear state that threatens the security of the world, but eliminating that threat won’t happen without consequences. In this video analysis, Mike Adams (the Health Ranger) explains how any attack on North Korea risks retaliation by Kim Jong-Un on its neighbors South Korea and Japan, both of which are crucial for supply chains that bolster the U.S. economy.

Given that North Korea has dozens of nuclear warheads — and an insane, cult-like leader who is obviously willing to use them — it’s a relatively simple strategic matter for North Korea to launch very short-range nuclear strikes on manufacturing centers or shipping ports of South Korea and Japan, obliterating those nations’ ability to import raw materials or export finished goods to world markets (North America and Europe, namely).

Even if North Korea’s missiles can’t yet reach Seattle, Washington, they can easily reach Tokyo and Seoul. And that means any attack on North Korea — no matter how justified — risks devastating blow back that could cripple regional manufacturing and export centers, causing a wave of cascading economic impacts across the United States, a nation already on the verge of an overdue market correction and debt collapse.(source : preparedness.news)

Is America prepared for a confrontation with North Korea?

As the tension between North Korea and the US continues to grow, the possibility of war is rapidly evolving into a probability. Now some military experts worry that an attack via EMP (electromagnetic pulse) on the US mainland might be a feasible option for Pyongyang.

The signs are certainly there: Having recently completed the ninth missile test of 2017, Kim Jong-un promised to send the US an even bigger “gift package.”