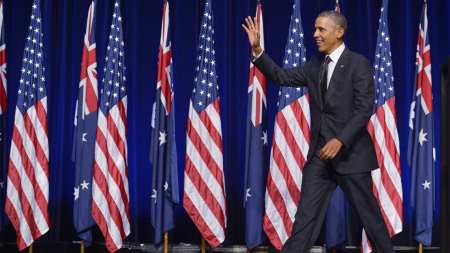 Washington's allies in the Asia Pacific can transform the region into a better place if threats like ISIS, Ebola, and "aggressive Russia" are contained – and this can be done with America's leadership, US President Barack Obama told Australian students.

The leader – speaking in the Australian city of Brisbane, where world leaders have gathered for the G20 summit – reiterated his view of which problems pose the greatest threat to the world.

The top three threats, according to Obama, are the same as those voiced before the UN General Assembly, although the order has changed. Militants from the Islamic States, previously put in third place by the US president, have apparently been upgraded to being the worst threat to humanity, provided that the order of mentioning indicates the severity. Meanwhile Russia, number two in the earlier speech, has drifted to third place.

Obama pledged to lead the fight against all three for the sake of universal values championed by America.

"We're leading in dealing with Ebola in West Africa and in opposing Russia's aggression against Ukraine, which is a threat to the world, as we saw in the appalling shoot-down of MH17," Obama told the audience at Queensland University.

The Australian government and media are siding with the US in blaming Russia for the tragedy, the circumstances of which are still under investigation. Washington accuses Russia of supplying Ukrainian rebel forces with a sophisticated surface-to-air missile which it says was used to shoot down the plane. Moscow denies the allegations and points to alternative scenarios, including an accidental attack on the plane by the Ukrainian military.

Obama’s speech focused on the future of the Asia Pacific and the challenges the region faces. Obama assured Washington's “ironclad commitment” to its regional allies, saying that “as the world’s only superpower,” America has unique responsibilities to other nations.

"I'm here today to say that American leadership in the Asia Pacific will always be a fundamental focus of my foreign policy," he said.

Threats to the region include North Korea's nuclear arsenal, territorial disputes, the failure of some governments to protect basic human rights, social inequality, and other factors, Obama said.

The US is prepared to have a constructive relationship with China, a nation that through its size and economic power will have a large impact on the region, but expects Beijing to act as a responsible player.

"We believe that nations and peoples have the right to live in security and peace; that any effective security order for Asia must be based not on spheres of influence, or coercion or intimidation where big nations bully the small, but on alliances for mutual security, international law and norms that are upheld, and the peaceful resolution of disputes," Obama said.

Another major problem the US president spoke of was climate change, much to the delight of his young audience. But the focus may be unwelcomed by the host of the G20 summit, Australian Prime Minister Tony Abbott, who has been criticized by environmental groups for abolishing carbon tax and pushing for the development of a coal industry in Australia. 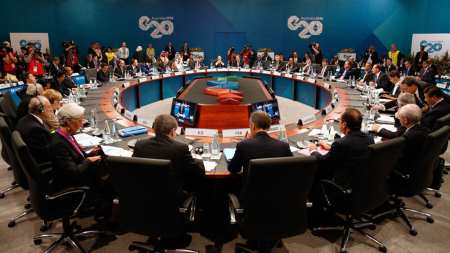 Obama called on the young people to raise their voices in protection of the environment. He also announced that the US is contributing $3 billion to an international fund to help poor countries develop through green industries, leapfrogging the dirty technologies that helped countries like the US and Australia build up their economies.

The contribution to the Green Climate Fund doubles what other countries previously pledged ahead of a November 20 deadline. Germany and France have pledged $1 billion each, while Mexico, South Korea, Japan and others have pledged smaller amounts.

The US president went on to brag that America had placed more people back into jobs than all other advanced economies combined over the last few years.

However, he added that “America cannot be expected to carry the world economy on its back,” which is why it is up to G20 leaders to boost demand, invest in infrastructure, and create new jobs.