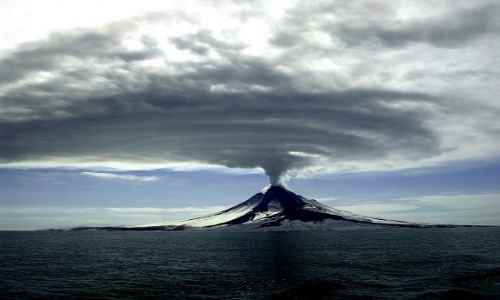 Have you noticed that our planet has begun to shake, rattle and roll?  Over the past few days we have seen major volcanic eruptions in Costa Rica and Indonesia, and according to Volcano Discovery 40 volcanoes around the planet are erupting right now as you read this article.  Meanwhile, earthquakes continue to shake the globe with alarming regularity.  Just last week, Ecuador was hit by a magnitude 6.7 earthquake and a magnitude 6.8 earthquake in rapid succession.  Overall, there have been more than 3,000 earthquakes of magnitude 1.5 or greater within the past month globally.  So yes, I write constantly about the rapidly accelerating deterioration of our financial system, but the coming “collapse” is not just about money.  I am convinced that we are entering a “perfect storm” in which a confluence of factors will absolutely cripple society and bring about changes that most of us would not even dare to imagine right now.

RELATED : Volcano ERUPTS Without Warning After “Experts” Assure that Earthquake “Swarms” Meant Nothing!

Let’s talk about the volcanic eruptions that we have seen in recent days.  The eruption down in Costa Rica took authorities completely by surprise, and a thick layer of dust and ash is coating vehicles and buildings 30 miles away in the capital city of San Jose…

Hundreds of people have gone to hospital, complaining of breathing difficulties and skin problems.

Some schools were shut and some flights into the country cancelled or diverted.

Leading up to this eruption, there were “swarms of small earthquakes” in the vicinity of the volcano, but scientists assured the public that these earthquake swarms were “not signs of an imminent eruption.”

Keep that in mind, because later in the article I am going to show you something.

But first let us talk about the other major eruption that is happening right now.  Down in Indonesia, Mount Sinabung has violently erupted, and this is causing all sorts of chaos…

The death toll from a volcanic eruption in western Indonesia has climbed to six, an official said Sunday, with fears more could have been trapped by the hot ash.

“Nine people were struck by the hot clouds. Six died, and three others remain critical with burns,” he said, adding the injured had been taken to hospital.

According to one report, “torrents of lava” are pouring out of the volcano, and this is just one example of how volcanoes that were once considered to be “inactive” are coming to life all over the world.  In fact, prior to 2010 Mount Sinabung had been dormant for about 400 years.

Meanwhile, there is “unprecedented” activity at Iceland’s very dangerous Baroabunga volcano.  This one is not erupting quite yet, but we definitely want to keep an eye on it, because a major eruption there would have serious implications for Europe.

To finish this article, I would like to provide an update to a piece that I posted last week on End of the American Dream.  Just prior to the eruption of the Turrialba volcano in Costa Rica, there were significant earthquake swarms in the vicinity of the volcano.  Well, the exact same thing is happening at three major volcanoes in the United States right now.

I would like to share three images with you that come from Google Earth via the Pacific Northwest Seismic Network.  This first image shows the earthquake activity that has taken place in the area around Mt. St. Helens in recent days.  Over the past month there have been 95 earthquakes in the region, and most of them have been centered right along the core of the volcano… 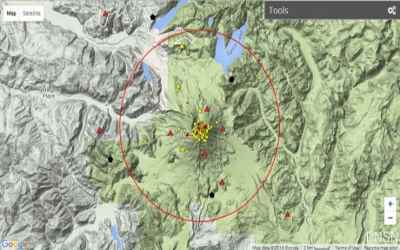 This next image shows what has been happening at Mt. Rainier.  Those that follow my work closely already know that I consider it to be the most dangerous mountain in America and that I believe that a major eruption of the volcano is coming in the not too distant future.  There have been 36 earthquakes at Mt. Rainier over the past month, and once again most of them have occurred right along the core of the volcano… 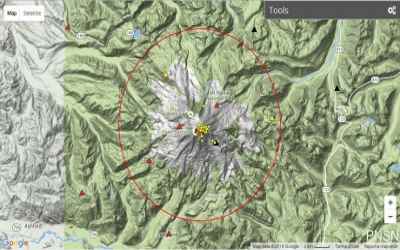 Mt. Hood is also a very dangerous volcano.  There have been 126 earthquakes in the vicinity of Mt. Hood in recent days, and in this image you can see that the earthquakes have been centered very tightly on a spot on the south face of the mountain.  This is alarming because it was also the south side of Mt. St. Helens that violently erupted back in 1980… 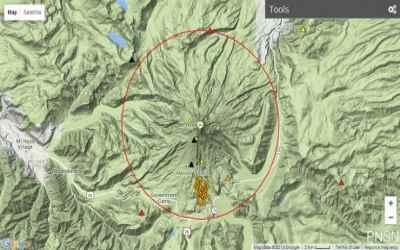 When there are major volcanic eruptions or major earthquakes in other parts of the globe, many Americans don’t seem to care too much because they don’t think that this rise in global seismic activity is any sort of a threat to them personally.

But the truth is that the entire west coast of the United States lies along the Ring of Fire, and virtually every other section of the Ring of Fire is roaring to life these days.

At some point, there will be historic earthquakes on the west coast.

At some point, there will be historic volcanic eruptions on the west coast.

Scientists assure us that these things are inevitable.

So let us certainly hope for the best, but putting our heads in the sand and pretending that these dangers do not exist is not going to help matters one bit.

Get prepared while you still can, because at some point time will run out.

*About the author: Michael Snyder is the founder and publisher of The Economic Collapse Blog. Michael’s controversial new book about Bible prophecy entitled “The Rapture Verdict” is available in paperback and for the Kindle on Amazon.com.* 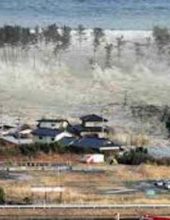