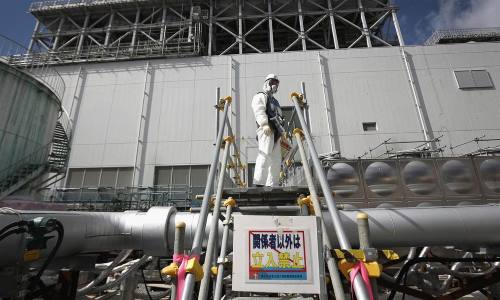 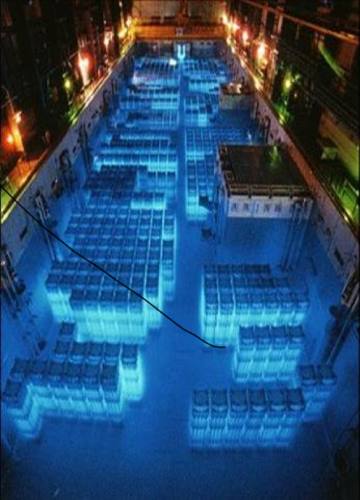 Ninety-six above-ground, aquamarine pools around the US that hold spent reactor fuel may not be as safe as U.S. regulators and the nuclear industry have publicly asserted, a study released by the National Academies of Sciences, Engineering, and Medicine warned.

Citing a little-noticed study by the Nuclear Regulatory Commission, the academies said that if an accident or an act of terrorism at a densely-filled pool caused a leak that drains the water away from the rods, the fuel rods would melt down and burst into flame, releasing tons of radiation directly into the atmosphere! A cataclysmic release of long-lasting radiation could force the extended evacuation of nearly 3.5 million people from territory larger than the state of New Jersey. It could also cause thousands of cancer deaths from excess radiation exposure, and as much as $700 billion dollars in costs to the national economy.

Read the Center for Public Integrity's version of this story.

Until an earthquake and a tsunami pummeled Japan's Fukushima Daiichi power plant in Japan on March 11, 2011, the possibility of such a catastrophe in the more than 30 states where nuclear fuel sits in radioactive pools seemed almost unthinkable. But the academies' new report– their second and final study of that event – says that the operators of U.S. nuclear plants and the commission that regulates them haven't fully grasped all the safety risks and as a result may be exposing the public to unwarranted dangers. 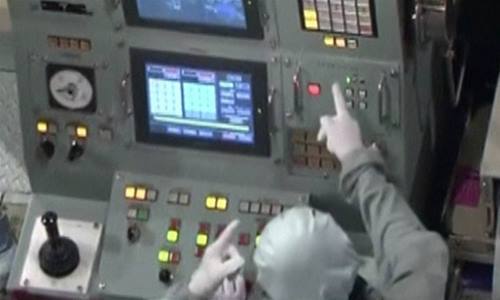 "There were some important issues that were not considered," said Joseph E. Shepherd, a professor of aeronautics and mechanical engineering at the California Institute of Technology who chaired the Academies board that conducted the study. Specifically, he was referring to the NRC's choice not to evaluate the risk of terrorism or insider sabotage as it considered spent-fuel pool safety.

The report's authors called not only for a new federal estimate of the safety and financial risks of a fuel fire but for a new examination of the relative benefits of withdrawing the spent fuel rods from the pools and storing them instead in dry casks aboveground. That idea has been promoted by some nuclear physicists and engineers for three decades but furiously opposed by the struggling industry because it could cost utilities as much as $4 billion.

The report, ordered by Congress and entitled Lessons Learned From the Fukushima Nuclear Accident for Improving Safety and Security of U.S. Nuclear Plants, starkly contradicts parts of a study by Nuclear Regulatory Commission staff released more than two years after the earthquake off Japan's coast drained power and coolant from three of Fukushima's reactors, causing a meltdown of their radioactive cores.

In its 2014 study, the NRC staff said a major earthquake could reasonably be expected to strike an area where spent fuel is stored in a pool once in 10 million years, maybe even less often, and even then, "spent fuel pools are likely to withstand severe earthquakes without leaking."

The NRC staff study also rated the threat of a terrorist attack that drained one of the pools as unknowable and said as a result that it need not be considered in weighing the costs and benefits of continuing to use the storage pools. "Based on the staff's view that security issues are effectively addressed in the existing regulatory program, they are not part of this analysis," the NRC report said.

But the academies' report, written by 17 distinguished nuclear physicists, engineers, and other scientists, said the industry and the NRC calculations were too narrow. "In fact, a spent fuel pool accident can result in large radioactive material releases, extensive land contamination, and large-scale population dislocations," it said. 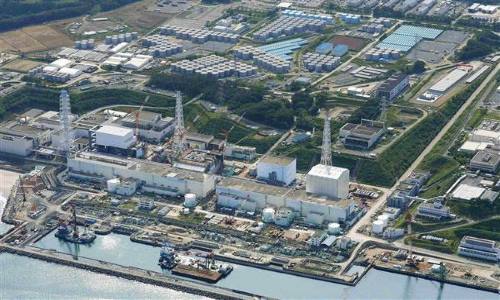 The report said the industry and the NRC need to strengthen "their capabilities for identifying, evaluating, and managing the risks from terrorist attacks." It said the commission, which regulates the industry, sets safety standards, and enforces compliance, should finally carry out a promise it made a decade ago to organize an independent review of the industry's spent fuel surveillance and security measures. And it said the commission also needs to conduct a more realistic appraisal than it has so far of the health consequences of a severe nuclear accident.

The NRC staff "did not provide the committee with a technical analysis to support its assertion that security requirements are being effectively addressed in its regulatory program," the Academies report said.

The NRC's immediate response to the report was not exactly a tight embrace. "Even with the recommendations that the academies' board has put together, we continue to conclude that spent fuel is being stored safely and securely in the U.S.," Scott Burnell, a spokesman for the Nuclear Regulatory Commission said. "Nothing in the report causes immediate concern."

Similarly, Steven Kraft, a senior technical advisor at the Nuclear Energy Institute, an industry advocacy organization, said no policy shift was warranted because the risks associated with keeping spent fuel in pools are "teensy." Everyone, he said, "likes to accuse us of being overly worried about money. If something has to be done, we do it. What we look at is: What's the best use of the money? If you're looking at extremely tiny improvements that cost a lot of money, you have to look at if it's the best use of money."

The academies' conclusions were based in part on its view that – even though the Fukushima disaster forced the hasty evacuation of 470,000 people and the ensuing cleanup costs could reach $93 billion – a more dire economic and health catastrophe was only narrowly averted, largely due to good luck.

In particular, according to the report, one of the spent fuel pools at the reactor site lost a significant portion of its coolant due to evaporation, when pumps bringing in a regular supply of new coolant lost power. If its highly radioactive rods had been exposed, their heat and exposure to oxygen could have caused a fire, giving radioactive materials and gases from inside and around the rods a way to escape into the environment. The ensuing radioactive contamination might have forced long-term relocation of the population of Tokyo, 177 miles to the south.

RELATED : Volcano ERUPTS Without Warning After “Experts” Assure that Earthquake “Swarms” Meant Nothing! 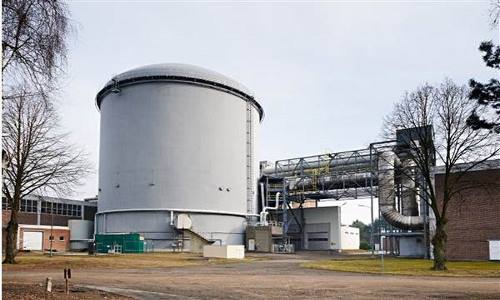 "Just like leaving a tea kettle on the stove," Shepherd said, as the water surrounding the fuel rods boiled off without replenishment and the level steadily dropped.

While the reactor rescue operation was still under way, Japanese scientists prepared an internal report on the possibility of Tokyo's contamination for the Japanese prime minister. But its existence "was initially kept secret because of the frightening nature of the scenarios it described," the Academies' report said. "The content [of the report] was so shocking that we decided to treat it as if it didn't exist," a senior Japanese government official told the Japan Times eight months later.

But the fuel rod pool in question was fortunately located next to another pool containing water that surrounded a reactor core, and by chance a leak developed between them in the earthquake, allowing extra coolant to spill into the most vulnerable fuel rod pool. It kept the rods just below the water's surface.

The reactor's operators had no idea at the time that either the leak or the serendipitous water replenishment was occurring, because the pools in question lacked adequate monitoring systems, the academies' report said. They "had not planned for or been trained to respond to the conditions that existed" in the cooling pools, it said. As a result, they had to improvise, using "helicopters, fire trucks, water cannons, concrete pump trucks, and ad hoc connections" to other water supplies.

That one of the spent fuel pools at Fukushima came so close to releasing massive amounts of radiation should be attention-grabbing, panel chairman Shepherd said. "This was a very significant event and it should serve as a wakeup call for the industry and regulators."

In its own analysis, the NRC has concluded dry-cask storage of spent fuel rods – which is technically feasible after the rods cool for a year or more in the pools — is only negligibly safer than leaving waste in pools for decades, as is routinely done.

But the academies' study focused on other factors that the NRC chose not to consider, such as the chance that terrorists might strike a spent-fuel pool or an insider might sabotage a pool. The report said predicting human behavior poses challenges, but more effort should have been made to understand the consequences of a deliberate attack.

Panel member Frank von Hippel, an emeritus professor and senior research physicist at Princeton University, said that in its "deeply-flawed" cost-benefit analysis, the NRC also excluded consideration of the consequences of property contamination more than 50 miles from a radiation release, even though a broader release is clearly possible. He said the NRC further used outmoded statistical estimates for the value of a human life, did not incorporate potential tourism losses after an accident, or consider the potential costs to the economy if a major accident forced multiple reactors to be shut down.

In an interview, von Hippel said he felt the commission had bent too easily to the nuclear industry's lobbying against dry cask storage.

"The agency's decision was based on significant and thorough technical analyses which are publicly available," Burnell, the NRC spokesman, responded. But he said the commission's staff will review the report more carefully and deliver a formal report to the commissioners sometime during the second half of the year.

The Center for Public Integrity is a nonprofit, nonpartisan investigative news organization in Washington, D.C