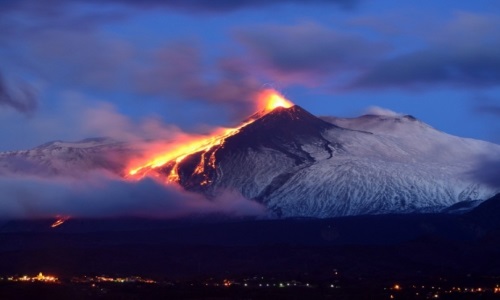 Europe's most active volcano, Mount Etna, has erupted this morning in Sicily, forcing the closure of nearby Catania airport due to the plumes of ash billowing into the sky.

Sec, the company that manages Catania airport, said the "direction and intensity of the wind" caused the ash to pose a danger to flights. The closure of airspace meant that twenty-one scheduled departures from the airport had to be scrapped and 26 arrivals re-routed to other destinations.

The smaller airport of Comiso in the area was also shut-down.

At 3,295 meters (10,810 feet), Etna is Europe's tallest volcano. Etna is a composite volcano, like other dangerous volcano such as Mount St Helens and Mount Vesuvius.

Like all volcanoes, it was created by the Earth's active tectonic plate system. The African plate is moving below the Eurasian plate and as the latter slips down into the Earth, it melts into Magma.

Magma erupts, rising on the surface, as lava and ash. In the past, the Italian authorities have used explosives, concrete dams, and ditches to divert lava flows away from towns and villages surrounding the mountain, including Catania.

Etna also had a place in Greek Mythology. The deadly monster Typhon was trapped under the mountain by Zeus, the god of the sky and thunder. Also, the forges of Hephaestus, the blacksmith of the gods, were said to be located underneath the mountain.

The lava flow down one side of the mount can be seen from Catania and Taormina, a popular seaside resort.

Three small earthquakes were also registered around the volcano on Sunday.

Aircraft are being warned not to fly in certain areas due to volcanic ash as shown on the mapbelow.  The ash, which is actually pulverized ROCK, stalls aircraft engines and destroys aircraft windshields. 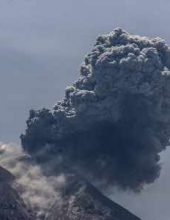