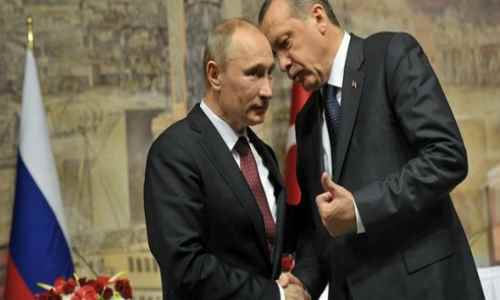 Arab media outlets are quoting diplomats in Ankara as disclosing that Turkey's President Erdogan was warned of an imminent army coup by Russia hours before it was initiated on Friday, while a western media outlet said Erdogan asked his supporters to remain in the streets after receiving advice from Tehran.

Several Arab media outlets quoted diplomatic sources in Ankara as saying that Turkey's National Intelligence Organization, known locally as the MIT, received intel from the Russian army that warned of an impending coup in the Muslim state.

The unnamed diplomats said the Russian army in the region had intercepted highly sensitive army exchanges and encoded radio messages showing that the Turkish army was readying to stage a coup against the administration in Ankara.

The exchanges included dispatch of several army choppers to President Erdogan's resort hotel to arrest or kill the president.

The diplomats were not sure of the Russian station that had intercepted the exchanges, but said the Russian army intelligence unit deployed in Khmeimim (also called Hmeimim) in Syria's Northern province of Lattakia is reportedly equipped with state-of-the-art electronic and eavesdropping systems to gather highly sensitive information for the Russian squadrons that are on an anti-terrorism mission in Syria.

Khmeimim in Northwestern Syria is the only Russian air force base in the war-ravaged country that provides cover for Syrian army and popular forces in multiple fronts across the country, in addition to bombing missions against terrorist targets. The Russian naval fleet, including its only aircraft carrier, are deployed along the coasts of Lattakia border province to provide logistical aid to the air base in a short time. Meantime, Russia has deployed its highly sophisticated S-400 air defense shield at Khmeimim and announced that it covers the entire Syrian skies with the same air defense system.

Last year, Turkey shot down a Russian Sukhoi bomber over Syrian skies and President Erdogan who was then a staunch enemy of Syrian President Bashar Al-Assad rejected extending an apology to Moscow for about a year, although economic sanctions by Russia as well as growing victories by the Syrian army, popular forces, Hezbollah fighters, Iranian advisors and Russian air force cornered the terrorists in Syria and similar victories against ISIL in Iraq convinced the Turkish president to not just apologize for the Sukhoi incident, but also show signs of a U-turn in foreign policy, saying that he is dropping his opposition to President Assad.

The diplomatic sources said the shift in Erdogan's foreign policy stated only a week before the coup has been "a major cause of several foreign states to provoke and promise support for the army to stage the coup, and the same shift also saved him" as it was not clear if the Russians would provide Ankara with their intel, otherwise.

In Ankara, official sources, including the Army iteself, confirmed that the Turkish army’s top generals had been informed of last week’s coup by the MIT hours before the plot came into action.

A statement issued by the army on July 19 described the events that took place on July 15, saying a majority within the military managed to suppress the coup attempt due to information provided by the MIT some five hours before the coup plot became public, national newspaper Hurriyet reported.

“The information given by the National Intelligence Organization on July 15, 2016, at around 4:00 p.m. was evaluated at the General Staff headquarters with the attendance of Chief of Staff General Hulusi Akar, Chief of the Army General Salih Zeki Colak and Deputy Chief of Staff  General Yasar Guler."

In order to counter the coup, high ranking officials within the Turkish army gave orders for all air and ground forces around the country to immediately cease operations including military vehicles such as tanks, planes and helicopters.

A report by Al-Jazeera Arabic suggests the coup plotters initiated the operation six hours ahead of time as they had previously planned to launch the coup at 3:00 a.m. local time on July 16.

While the report does not indicate the reason for the coup being initiated ahead of time, the revelation by the military suggests the coup plotters understood their plans had been compromised and decided to act.

READ MORE : All USA People Need To See This – These Are The Last Days 2016-2017: The CLASH of Civilizations

Reports also suggest the coup plotters had orders to kidnap or kill President Recep Tayyip Erdogan as helicopters headed toward the hotel he was staying in at the holiday resort of Marmaris. But Erdogan had left 44 minutes before they arrived, according to Al-Jazeera’s report.

The official statements coming out from Ankara are in full compliance with the Arab media reports quoting the diplomatic sources on the Russian intel.

Only four days after the coup, Erdogan appeared on the media saying that he plans to declare a crucial turn in foreign policy that would "end differences with Turkey's neighboring states".

Meantime, Iran rushed to condemn the Turkish army coup only two hours after it started. Several top security and foreign policy officials in Tehran were in constant contact with President Erdogan and his cabinet ministers all throughout Friday.

As July 15 was coming to an end in Tehran, Iranian Foreign Minister Mohammad Javad Zarif was on the phone with his Turkish counterpart Mevlut Cavusoglu, whose government was under the threat of being overthrown by a military coup. Meanwhile, Ali Shamkhani, the secretary of Iran’s Supreme National Security Council (SNSC), was on another line with security officials in Ankara. All the while, Qassem Soleimani, the commander of the Islamic Revolutionary Guard Corps’ Quds Force, Iran’s regional military arm, was busy pursuing and reviewing various scenarios that might emerge.

“It’s not a secret anymore,” an Iranian official told Al-Monitor on condition of anonymity. “Zarif, Shamkhani and Soleimani were executing higher orders. The whole establishment was too concerned. Turkey is a neighboring state. President Erdogan and his government are strong partners of Iran. Our nations enjoy strong brotherly ties, so it’s the least we can do to show solidarity and try to offer any help they might need in such critical times.”

"Another Iranian official saw parallels between the successful coup against Iranian Prime Minister Mohammad Mosaddegh in 1953 and this year's coup attempt in Turkey," Al-Monitor said.

The official told Al-Monitor on condition of anonymity, “What we know is that this move was triggered by foreign hands. We went through the same in the past, and because Mr. Erdogan is today looking forward to playing a better role in the region, they want him down.” The Iranian official said, “There was a message that was conveyed to Turkish security officials: Don’t leave the streets. This coup might be made up of several waves; it happened in Iran in 1953. When the first coup failed, they had another one ready — and they succeeded.”

In Ankara, the government claims the coup and the generals behind it are loyal followers of US-based Islamic cleric Fethullah Gulen, who was once Erdogan’s key ally before a major fallout in 2012. Many believe that Gulen is the main cause of why Ankara officials have repeatedly accused the US of masterminding the plot.

Gulen is running a multi-billion dollar enterprise in Saudi Arabia and has grown into a serious bone of contention in Ankara-Riyadh ties. Saudi Arabia reserved condemnation of the coup in a suspicious move. Later, reports surfaced the media that the top brass in Riyadh and Abu Dhabi – two strong allies of the US with unbreakably intimate ties with each other in the Persian Gulf – were involved in the coup.

Saudi whistle-blower Mujtahid, who is believed to be a member of or have a well-connected source in the royal family, dislosed that senior government officials in Riyadh and Abu Dhabi had been informed of the coup in Turkey long before it took place.

"Saudi Deputy Crown Prince and Defense Minister Mohammad bin Salman had been informed of the military coup in Turkey," Mujtahid wrote on his twitter page on Monday.

"There are reasons which show that given his intimate relations with Mohammad bin Zayed bin Sultan Al-Nahyan (the Crown Prince of Abu Dhabi and Deputy Supreme Commander of the UAE Armed Forces), Mohammad bin Salman was aware of this coup," he added.

According to Mujtahid, Turkish intelligence agencies have received information about some negative collaboration between bin Salman and bin Zayed, but the Saudis have managed to convince the Justice and Development party to rest assured and be optimistic about Riyadh's measures.

He revealed that bin Salman has been trying to convince the Turks to conceal the UAE's role in the coup and has promised a large amount of cash in reprisal.

The last week coup in Turkey is now growing into a major regional confrontation over Turkey's shift in policy over Syria now.