If this is true and since the hacker group Anonymous is famous for hacking into high level documents and emails, it most likely is true, then this is a blockbuster bombshell!

Hacked emails to and from US Army Attache Assistant in Kiev Jason Gresh with Ukrainian General Staff Igor Protsyk, discuss plans to arrange a massive attack on transport hubs and Ukrainian military bases in order to “frame-up the neighbor,” and “create favorable conditions for Pentagon to act.”

The emails from Igor are in Russian, so the link is here for anyone that reads Russian but the email from US Army Attache Assistant in Kiev Jason Gresh is in English and the ramifications of it are enormous.

Events are moving rapidly in Crimea. Our friends in Washington expect more decisive actions from your network.
I think it’s time to implement the plan we discussed lately. Your job is to cause some problems to the transport hubs in the south-east in order to frame-up the neighbor.
It will create favorable conditions for Pentagon and the Company to act.
Do not waste time, my friend.

Here is a screen shot of Gresh’s LinkedIn profile.

A major false flag against Ukraine, blamed on Russia and publicly hailed as an attack by Russia against Ukraine for Obama to use as an excuse for US Military intervention, which undoubtedly would lead to World War III.

(Note- YouTube is having technical problems, if the video is not showing, come back in about a few minutes to watch) 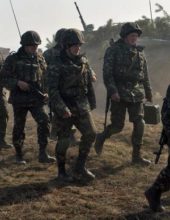