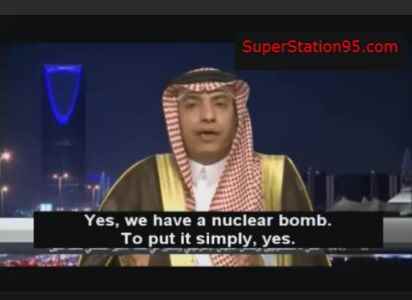 In a shocking development, Saudi Arabia has now publicly admitted they possess NUCLEAR BOMBS.  The bombs will protect the ground invasion of Syria by Turkey and Saudi Arabia. . . which puts the Russians in the unenviable position of having to use nuclear weapons to defend themselves and Syria.

Speaking in a television interview Dahham Al-'Anzi of the Kingdom of Saudi Arabia was discussing why many in the Arab world feel the need for Syrian President Bashar al-Assad to be removed from power, and that a ground invasion was not only necessary, but is going to take place!

In the context of the pending invasion, Dahham Al-'Anzi outlined the missiles, planes and other war-fighting equipment the Kingdom has acquired and then revealed "We have a nuclear bomb" and asked the TV Interviewer, "Why do you think we have all these weapons?" He then answered his own question "to protect Arabs and Muslims."

Not content to have revealed this staggering information, Dahham Al-'Anzi went further and stated "We may test it within weeks."

The stunned TV Interviewer said "This is breaking news, I haven't heard this before" to which Dahham Al-'Anzi replied "This isn't breaking news, the super powers have known about this for awhile."

There is much more information coming in regards to this story, we are getting the info out as fast as we can given the intense need to verify and corroborate it before we report.

RUSSIAN TROOPS IN SYRIA TO BE OVER-RUN

With Saudi Arabia presently hosting military "exercises" with some 300,000 troops in the northern part of its country, and Turkey massing tanks and troops in the southern part of their country, it is becoming clear that Syria will be over-run within hours once the Saudis (and their coalition) and the Turks, strike from both the north and the south.

Russia has a policy of using tactical nuclear weapons if they are faced with being over-run.

When the ground ivasion of Syria begins — likely within days — Russia will have to make one of two choices:

If Russia strikes, then it is clear that Saudi Arabia will use full-sized nuke(s) against the Russian base at Latakia and perhaps even against the country of Russia itself!  In either case, if someone nukes Russian troops, it is clear Russia will strike back.

The question is, who?

Does Russia strike Riyadh, Mecca and Medina – which would rid the world of much trouble from a religion with stone age values and barbarc rituals and practices?  Or does Russia strike both Saudi Arabia AND Turkey since both are attacking?

And if Russia uses tactical nukes INSIDE SYRIA, and Saudi Arabia launches from outside Syria, what will the US and NATO do?

But what will the US do?  The US is in an impossible predicament:

1) If the US strikes Russia, Russia will strike back – and millions of us in both countries, die.

2) If the US fails to strike back, then no US ally will ever believe our promise to defend them!

In either case, we here in the US, and our brethren in Russia, are being set up to destroy each other, by a group of Muslim fanatics.  We should not fall into a trap where Christian USA and Christian Russia do battle over Muslim madmen in the Middle East.

Perhaps a better choice would be for the US, Russia and China to meet together and agree to jointly wipe out the entire Middle East in one, huge strike of intercontinental ballistic missiles.  All three countries are sophisticated enough to achieve "Time-On-Target" arrival of our missiles, so all their cities detonate at precisely the same time.  It would actually be merciful; they wouldn't know what hit them.

Once the radiation clears, we would go in jointly, re-establish the oil systems, and equally divide the spoils amongst ourselves.

This would wipe out a barbaric group of troublemakers who have done NOTHING but bring misery and death to the world for centuries. Remember, these people have been in that area for several thousand years yet in all that time, they never knew there was oil under them and never knew how to look for it.  It wasn't until we in the west came and discovered the oil that they began to reap the benefits of the civilized world.

Our ingenuity and advanced societies enabled the Arabs to gain riches beyond the dreams of avarice, and allowed their people to become educated, live in homes instead of tents and drive cars instead of Camels. (Although there are still a few who choose to live in tents and drive Camels to this very day!)

But make no mistake, a tiger cannot change its stripes.  On the surface, they dress well and speak well, but beneath the surface, their true nature and the culture it has spawned, remains the same.  Greedy, shifty, corrupt, barbarians!

Want proof? How have they repaid the west for discovering the oil beneath their lands which made them rich?  They engage in price-fixing to squeeze the most money out of us as they can.  They recruit, train and equip barbarians to wage "Jihad" invade peaceful peoples and destroy sacred antiquities.  They codify in their laws, hideous practices of beheadings, stoning, mutilation.

Let's be clear: Just because it is "law" doesn't raise it above barbarism.  In that same light, just because they dress in expensive clothes,  are educated in the finest schools, live in homes instead of tents, drive cars instead of Camels and enjoy all our high technology inventions, doesn't raise them from barbarism.  True nature cannot be changed.

A coordinated strike by the US, Russia and China would cleanse the world of filthy, brutal, savagery.  It would insure the peace for hundreds of years, and secure all of our energy needs for longer than that.

Perhaps this last item is the best option for the civilized world.

While this is not a choice that we here at a radio station can make, or carry out, we know what our choice would be if it were within our lawful power to do so.  Since it is not within our lawful power, we will simply wait to see what actions are undertaken by those we vest with the lawful authority to act.(source)