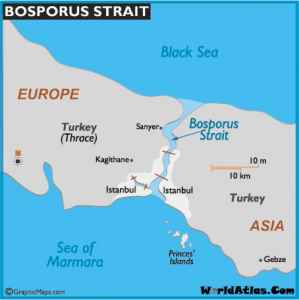 Turkey intends to CLOSE the Bosporus Strait to Russian Naval Vessels, sealing them in (or out) of the Black Sea, claiming Russia is aiding "Kurd Terrorists" in Syria.

"Russia strengthens and supports PYD organization of Syria, (Kurds) which Ankara considers to be terrorists, and also responsible for the recent car Bombing in the Turkish Captial which left 28 dead.

According to the pro-government Turkish daily "Sabah" Turkey complained that Russia, with its warships passing through the Straits toward the eastern Mediterranean, are carrying weapons and ammunition to supply the Kurds for "terrorist operations."

For this reason, Turkey says, it has the right to close the strait to the Russian Fleet.

In the past, Russia has publicly and specifically stated "Closing the Turkey Strait would automatically mean war."

Some are speculating that Turkish President Erdogan is simply bluffing, but others think he should be committed into a "madhouse" because his actions will destroy Turkey.

The Bosphorus (/ˈbɒsfərəs/) or Bosporus (/ˈbɒspərəs/; Ancient Greek: Βόσπορος, Bósporos; Turkish: Boğaziçi) is a natural strait and internationally-significant waterway located in northwestern Turkey that forms part of the continental boundary between Europe and Asia, and separates Asian Turkey from European Turkey. The world's narrowest strait used for international navigation, the Bosporus connects the Black Sea with the Sea of Marmara, and, by extension via the Dardanelles, the Aegean and Mediterranean Seas.

Most of the shores of the strait are heavily settled, straddled by the city of Istanbul's metropolitan population of 17 million inhabitants extending inland from both coasts.

Together with the Dardanelles (Hellespont) strait, the Bosphorus forms the Turkish Straits.

As a maritime waterway, the Bosphorus connects various seas along the Eastern Mediterranean, the Balkans, the Near East, and Western Eurasia, and specifically connects the Black Sea to the Sea of Marmara. The Marmara further connects to the Aegean and Mediterranean Seas via the Dardanelles. Thus, the Bosphorus allows maritime connections from the Black Sea all the way to the Mediterranean Sea and the Atlantic Ocean via Gibraltar, and the Indian Ocean through the Suez Canal, making it a crucial international waterway, in particular for the passage of goods coming in from Russia.

A common mistake often made by foreigners is to assume the Bosphorus is a river, when it is, in fact, a narrow sea channel.
As part of the only passage between the Black Sea and the Mediterranean, the Bosphorus has always been of great importance from a commercial and military point of view, and remains strategically important today. It is a major sea access route for numerous countries, including Russia and Ukraine. Control over it has been an objective of a number of hostilities in modern history, notably the Russo-Turkish War (1877–78), as well as of the attack of the Allied Powers on the Dardanelles during the 1915 Battle of Gallipoli in the course of World War I.(source)

After the first wave of reports, there have not been additional dispatches from the Bosphorus suggesting the blockade is in effect and, even more crucially, no Russian “Syrian Express” ships has been reported as having been forced to return to Novorossiysk or Latakia due to its inability to cross the straits.

Indeed, there would be significant political and economic costs for Turkey to do so. The country does collect a fair amount of revenue from the ships transiting the straits. If the straits are closed even once, it is highly that from now on these cargoes would no longer go by ship but by rail, after being offloaded in Greek ports. It would also damage Turkey’s reputation as a reliable economic partner if an element of political risk of this magnitude creeps into Turkey’s business partners’ calculations. Moreover, closing the straits now is actually more difficult to do politically than before the Su-24 incident. Not only had Erdogan not received the political support from NATO he evidently hoped for, Putin had gone on the offensive in the form of releasing a flood of Russian intelligence information implicating Turkey in collusion with ISIS and buying stolen Syrian and Iraqi petroleum from the Islamic State. Even the US is now calling on Turkey to finally secure its borders and stop allowing militants and oil to cross border to and from Syria.


The fact that the Su-24 incident backfired on Erdogan, as the Russian aircraft have made targeting border areas with Turkey a priority, and NATO failed to act in accordance with Erdogan’s expectations by coming to Turkey’s “defense” and pressuring Russia to ratchet down its Syria campaign means that he is rather constrained in his future responses. It is significant that whereas Western mainstream media wholly ignored the Russian MOD briefing on the MH17 shoot-down, they did report on its briefing detailing Turkey-ISIS oil trade. Likewise the perception that Russia is fighting ISIS while Turkey is supporting the terrorist organization has become more widespread in the West, so much so that additional moves against Russia by Turkey would only reinforce that perception and leave Turkey more isolated in the internal arena. Рaving said that, Erdogan has painted himself into a corner and, like a cornered rat, he is liable to lash out. However, that lashing out is only likely to make the situation worse for him and for Turkey.

The Russian leadership is no doubt taking that threat seriously and it does have a variety of measures to potentially counteract it, though none of them are highly efficient solutions. Military action against Turkey is out of the question, as NATO (i.e., US) would almost certainly come to Turkey’s aid. Shipping goods via the Caspian Sea or using an overland route to Syria does not appear plausible considering the current configuration of borders and the extent of territory controlled by the Islamic State. A more promising solution would be to start supplying Syria using Baltic ports which would certainly make individual trips longer and therefore costlier, but also free from the interference of any NATO member as neither the Danish Straits nor Gibraltar can be closed in the way the Bosphorus can. Finally, Russia could attempt to negotiate an agreement with Iraq to establish an air base there, which could then be more easily supplied via the Caspian Sea and Iran and whose existence would allow the number of sorties generated by Hmeimim to be reduced. All of these are options open to the Russian leadership, Erdogan is clearly aware that even the Bosphorus blockade would likely not yield the desired result of crippling the Russian air campaign, which is probably the reason why so far he has not launched an all-out, official blockade of the Bosphorus.

Video : The Next News Network